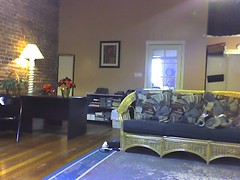 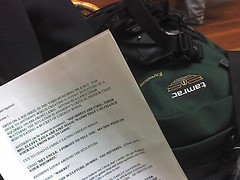 Round 1 done,
originally uploaded by Da_Zhuang.
sticking around for round 2.. :D

I think the whole thing went really well.  In baseball terms, it probably wasn't a home-run, but I think I came pretty close to scoring if I didn't actually hit one.

I got there about 10 minutes early, signed in, had my photo taken, filled out paperwork.  They were taking people in pairs, so the man and lady before me went in and were back out again within 5 minutes after quite the noisy audition.  I went in with a nice Indian woman who seemed to be pretty unsure of what she was doing and who she was (she had to be asked to give her last name on camera).

There were two different scenes to be done.  One male/female, and one male/male.  Of course we did the male/female scene.  Her line was always first, and every time they said action, she looked at me as if she was expecting me to say something.  We went through it the first time, the director told her "Good!  Keep doing what you're doing" then gave me some notes.  We did it again.  Same thing, different notes.  Third time, he smiled, thanked the lady and asked if I could stick around to read the male/male scene.  Of course I said yes, and retired to the lobby to wait for another guy to show up.

During the wait, I pimped Moron Life to the nice guy doing the sign in stuff.  We talked "shop" for a while and he asked lots of questions, which was cool.  The pimping wasn't unsolicited that way.  The lady who arranged the auditions came out and chatted for a few minutes while the next two guys to arrive signed in and did their paperwork.  Then I was whisked back into the audition room and got to do scene number two.  Same thing.  No notes for my scene partner, different notes for me each time.  Then we switched rolls for the last read thru, and then I was gone, less than 45 minutes or so after I started.

On the way home, I stopped at the comic book store right near

tersa's place, then hopped over to the pet store to look at fish stuff.  And here's where the weird shit happens.

As I was walking out of the pet store, the guy who I did the second read with was walking into the comic book store I'd just left.

Now, Mountain View is quite a haul from Downtown San Francisco, so this startled me a bit.  But as

So, no call from the Aruba gig, and I'm pretty sure today was the deadline.

But that's actually pretty okay, because there's SO much stuff going on early next year that it would have been a bitch to deal with not doing it all. :)