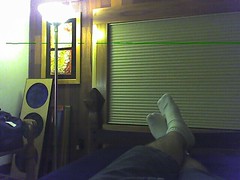 :),
originally uploaded by Da_Zhuang.
I can't even begin to tell you what a fantastic day this has been... More later.

You have only just begun. You can get a lot further. You can achieve a lot more. You have set an important process in motion. Already, it has begun to gain some momentum. Soon, you will see a snowball effect. One thing will lead to another. Before you know it, it will be time to celebrate the arrival of a new era. Soon, even the objective which now seems so deeply desirable, yet which also appears to be so hopelessly unattainable, will begin to look reassuringly feasible.

Because it amuses me, I am going to recount the last 48 hours in reverseish.

I got home about 45 minutes ago after spending the afternoon with Andrea and Cliff working on a website that will be a community portal for people in the Internet Entertainment Industry.  I can't/don't want to name drop, but some of the potential board of directors for this project... damn.

This morning I drove back down from Santa Rosa.  BEAUTIFUL drive... even when I was forced to jump over 580 to go through Oakland because of traffic on the Golden Gate.

Late yesterday afternoon, I drove across the Golden Gate and up to Santa Rosa to visit old family friends Kathy and David.  I'd not seen them since my sister's wedding eleventy years ago.  David is an artist, and some of his stuff is going to be featured on HGTV this summer, so he wants a webpage to handle any potential visitors that show up because of the publicity.  Kathy and David are just totally awesome people, and it was fantastic to see them.  Their house is just AMAZING-- David's made 90% of the furniture.  I had my own bedroom with attached bath last night.  We had fantastic wine with steaks at dinner followed by Late Harvest Reisling, Chocolate and Ice Cream.  Just Mmmmmmmmmmmmm.

Early afternoon yesterday, Shaun and I drove across town to the Sutro Baths where I took a bunch of pictures and enjoyed standing in ruins that I didn't know existed.  We climed fences we shouldn't have climbed to get better photos.  Randomly shot the shit for a while.  Well worth running into traffic on the drive up to Santa Rosa.

Yesterday I drove up to San Francisco to have lunch with my friend Shaun Landry, who is the undisputed Queen of Improv in the Bay Area.  She's a really talented woman, and loves to help other people put shows and whatnot together.  She's the head of the San Francisco Improv Alliance and coordinator for the SF Improv Festival.  She's the one that asked me to be their Thursday night Emcee.

Well, Shaun and I went to Basil for lunch (fantastic Thai) wherein I dropped the proposal for an Improv show I wanted to put together in her lap.  It's a show I've been plotting for a while after being inspired by

merlinofchaos to develop it.  I was aiming to put the show up for a couple Thursday nights in the fall.  But before Shaun even finished the first page of the proposal, she looked up and said,  "January, 2007.  Friday and Saturday nights.  We'll start at the Climate Theater, but will probably have to move it to a bigger venue eventually."  So yeah.  I'll be directing a show that will be opening next January in San Francisco.  Go me!

And that was the last 48 hours.  I'm fucking exhausted.