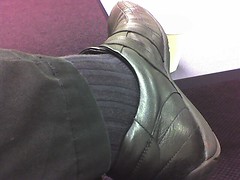 And we wait...,
originally uploaded by Da_Zhuang.
Only took an hour and fortyfive minutes to get up here this morning. Wheeeeeeee!

NASA called and cancelled. The rest of my week just got a little less hectic.

I'm not sure if this is good or bad.

(they're doing ALOT of setup for this thing... Wow)

that may be the most fun I've had at an audition. I was there nearly 45 minutes and got to work with 6 different people.

So the first audition this morning was for HBO, for a webvertisement (if that's a word).  I got there a little before nine, and they were setting up.  Things were slightly delayed, because the director of the spot was running a wee late due to traffic.  But when it was time for go, there was only me and three women there.

They pulled me and the first woman in, and had us do the scene I liked better (but didn't get to do) from Thursday's audition.  They let us improv a little around the script, which was cool.  I got GOOD direction from the director (let's just hope I followed his instructions well enough).  And when we were done, they let the woman go and asked me to stay.

I cycled through the two other women (in the same scene) and then three (four?) guys in the scene I did on Thursday.  Turns out there weren't as many people coming in to read for the part I was up for as there were for the other parts (at least not that early in the morning), so I basically got an extended audition and got to play opposite a nice variety of people.

So that was cool.

The other audition was more typical.  It was for Sun Microsystems (IT Guys Gone Wild).  Quick and dirty.  In, state your name, shoot, out.  Five minutes round trip.

Made it back down here for lunch with

Turk, and then ran off to vote (I was #151 in my precinct).  There were alot of younger (maybe high school aged?) people running the poling place with a few elderly folks supervising.  They were awesomely pleasant, and it was actually nice to chat with them for the whole minute and a half it took me to get checked in before voting (no waiting, baby!).

So there's my day.  Now to wash out the spray-on hair, and get ready for the restaurant tonight.