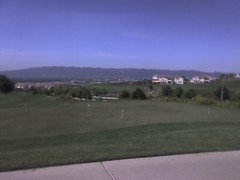 I arrived at the first location shortly after 10:15.  The crew was unloading equipment from the truck.  Bob, the director arrived a few minutes later, and I wandered with him over to the putting green to look at the space we'd be shooting in.  Once the makeup/wardrobe lady arrived (she actually remembered me from the last shoot I did down in Salinas, which was cool), I unloaded my clothes from the car, we set up shop in the board room turned green room, and once my partner in film arrived, we picked out wardrobe.

The day was a hell of a lot of fun.  This director and his crew are a total blast to work with.  They know their shit, and they get it done quickly.  We shot on the putting green from about 11:30 till 3:00ish.  We should have been done about a half an hour before that, but I was having trouble sinking the 12 foot put.  Once we cut it down to a six footer, I nailed it, first try.  Please remember that I've only ever played one game of non-put put in my life.

Nicole, our makeup lady (who is totally awesome), was constantly making sure that we (the Talent) were doing okay.  Sometimes I forget what it's like to be in front of the camera with no behind the scenes responsibilities.  So when I was hauling my own golf bag back to the pro shop at the end of the afternoon, she offered to carry it for me and I laughed.  She smiled and said, "Working in Hollywood has trained me to be way too nice to the Talent."  To which I responded, "Producing my own stuff has taught me that you can never be too nice to your crew."  She smiled, and we went to break down the green room.

The crew and I (my partner was released after the golf bit, it was just me in part two) headed over for a really tasty Hunan lunch around 4:00, and made it to the second location (the Bank) shortly after 5:00, where the extras for that scene were already waiting.  Now Wendy, my casting agent in Mountain View, generally casts really cool people to be extras (me being one of them)... these folks came from some other agency, though, and while they were nice PEOPLE, they were really crappy extras.  They were really snotty about the fact that we were running behind schedule, they were totally unsatisfied with the craft services selection (it was a big basket of chips and other snack items with water and Gatorade), and were all around "put out" with pretty much everything that happened.  Now, I realize that craft service is something that's generally included with most shoots, but I'm also of the camp that believes "crew first, talent second" when it comes to this stuff. And if it's not a huge spread, I'm cool with that.  Hell, I was ready to buy my own lunch, but Bob insisted it was on the client.  These guys, however, dove on the basket like they'd not eaten all day, complaining the entire time.  Seriously, their call was 4:30.  That's too early for dinner. And we were scheduled to be out of there by 7:00, so it's not like they were missing a meal to be there.  Even our makeup lady (who still works feature films when they're anywhere within 100 miles of SF) was shocked by just how demanding they were.

I, however, continued to have a great time hanging out with the crew, and the extras were surprised when they found out I was the principle for the scene.  They thought I was an assistant producer or something.  It's funny how their friendliness towards me ramped up once they realized that I was the actor getting paid the most for the shoot.  Heh.

We got through it, and I made the crew laugh alot (which was good, because Bob wanted to have fun with this part of the piece).  On my closeup I revealed my penchant for being a camera whore, and said as much out loud, making kissy faces into the camera as they were framing the shot.  Tom, the cinematographer laughingly agreed with me (and the extras looked shocked that he did so) which caused me to do a little victory dance, much to the sound guy's amusement.  But we got everything done pretty quickly, and wrapped by 7:15.  Luckily Bob got back from making an Arby's run for the extras (yeah, they made the Producer/Director go get them food after we wrapped) before I took off for the day, so I got to say goodbye to him.

Hopefully I'll get to work for with them again really soon.

me
The Talent
Collapse