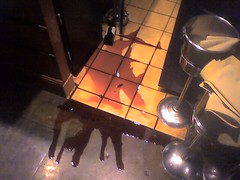 Oops...,
originally uploaded by Da_Zhuang.
Not my fault!

Wheaton posted a great piece today about and audition he did last week, and booked.  Check it out.

Last Friday afternoon, I got myself up early.  Showered, made myself pretty and made the drive up to San Francisco for an audition at Adobe's SF headquarters.  It was a beautiful day. I drove up 101 with the top down on my car.  Switched over to 280.  Got off at 6th street and promptly got lost.

Which was totally okay, because I was nearly an hour early.

I got my brain put back on, and found my way to the parking garage across the street from Adobe's offices.  Drove ALL the way to the roof in one of those drive in a very tight circle while going up and try not to puke garage ramps.  Hauled myself over to the Adobe building with the email from my casting agent in my hand.  It told me where to go, whose name to give, and a bunch of other things that had nothing to do with me.

At the front security desk at Adobe were these three very nice ladies.  I told them who I was there to see, one of them had me read a 5 page Non-disclosure agreement that came up on one of those Best Buy signature pad things.  I signed my life away and they printed my visitor badge.  Before they gave it to me, though, one of them asked "What's your line?"

So I gave them a line read, and they all leaned together and whispered and nodded.

"You're MUCH better than the guy who just went in."

I laughed and thanked them, and by that time, my escort was there and showed me into the building where [REDACTED DUE TO NDA].

After seeing all THAT, I was led into a conference room where several other actors were waiting.  Turns out "the guy who just went in" was the guy I did the Direct Deposit video with.  There was another guy, who left for the casting room just as I got there, and there was this woman who had one of those voices that made you want to beat her with the nearest blunt object every time she spoke.  And she spoke.  Alot.

The casting assistant was really nice.  She went over the piece with us, told us what it was about and showed us a mockup of what everything would look like when it was done.  Then she carted Direct Deposit guy and Yappy Lady off to the casting studio.

The other guy who came in after me, just before they left, struck up a conversation about life and such, and it led to Improv.  He sort of had that I'm an actor who Improvises because it Amuses me, but isn't really worth much attitude.  So I brought out the NASA card and paraded it in front of his face.  That made me feel good.  He was suitable impressed that Improv could get you a gig at NASA, and his smugness evaporated rather quickly.

Finally, it was my turn to go in.  Direct Deposit guy came back to the room and asked for another one of the sides, because he had been asked to read for another part, too.  The part I was reading for.  Great.  We were both escorted to the casting studio and on the way I punched him in the arm, "My part, man!"  He laughed and apologised.

I went in and did a reading.  Went through the piece four times (it was short).  Took direction pretty well (it seems).  And the director said, "Thanks.  I think you've got a good shot at this.  We'll be calling people after 2:00 on Tuesday."  I smiled, thanked her and her camera man, and made my way back to my car, stopping to harass the desk ladies one last time before I left.

2:00 Tuesday has come and gone, however.

I'm glad I learned how to deal with not getting the part a LONG time ago... otherwise, auditions would suck.  Luckily, I can go have fun with them.

silas7 to the rest of you)
Collapse