So NetIdentity.com, who hosts my Klae@Lastname.com email address sucks bodacious amounts of pooper. For the last several months, random incoming emails have been getting bounced with a "no relaying" error message, and every time I report it I get some sort of excuse about how their full staff attention is on the problem and that I should forward other bounce messages to them to examine. Except that I'm not the one getting the bounce messages, my friends are. And when I tell them that I get no reply.

So now, the staff that WASN'T working on that problem (I'm not sure how much of all is left after you've assigned all to a task, but hey...) has gone an upgraded their email servers to new servers with better spam filtering (ooooooooooooooh!).

And I'm not getting ANY mail.

I can send mail. But I can't get it, nor can I log into the web interface to check it.

So I'll slowly be phasing out the @Lastname.com address.

Going forward, if you would kindly use MyFirstName@MyFirstNameMyLastName.net that would be awesome.

If you can't figure it out from the above, leave a comment and I'll be less subtle. :D

me
Handing out pink slips 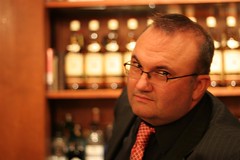 Long night, but much fun.

Made it up to Mountain View wicked early, so I had time to find a Subway and grab some lunch before the interview. Turns out the SETI offices are pretty much directly across 101 from NASA. So it's like being in the same space neighborhood.

Post sammich, I got back to the building about 20 minutes early, waited five more, and went it.

The receptionist buzzed both the interviewers, but they were off somewhere, so I picked up a copy of Explorer, the SETI magazine and read while I waited.

Inside the Explorer, I found an article about the podcast, and found out that one of the people I'd be interviewing with (the show host) is the Senior Astronomer at the Institute.

Right on schedule at 2:30, they called up for me, and I was escorted to a conference room in the Carl Sagan Center for the Study of Life in the Universe. The Producer and Host of the show were there, and they were both really nice. They made sure I knew it was a part time gig (2 days per weekish), and that it would be alot of self-supervised work in the studio while they worked on their OTHER jobs, too. Cause they do more than just the podcast, hence the need for an Assistant Producer.

I got the impression that they thought I might be overqualified for the job, but they didn't come out and say that. They asked what my interest in Radio was, and I explained that it wasn't so much Radio, as the fact that this job was the opportunity to combine my fascination with the Scientific with my love of production. Much like my work with NASA, it was the combination of many of the things that I love to do.

I was pretty cheerful throughout the interview, and the Producer mentioned that I seem to bring alot of joy to whatever I'm doing. The fact that she noticed, impressed me alot.

They gave me a hypothetical situation: Show deadline is 6PM, at 9AM the main guest for the show who's doing a phone interview has to cancel. What do I do?

I laughed and said, that I hoped there was actually a whole list of potential guests we were considering for that show, and that I'd start at the top of that list and work my way down, trying to see who I could sweet talk into doing a last minute interview.

The Producer smiled, repeated the phrase "Sweet talk" and nodded.

The interview was supposed to be 15 minutes, I found out, when we'd hit 25. I shook their hands and headed out. They said that it'd probably be two weeks or so before they had an final decision.

They're looking at syndicating the show on NPR, which would be a HUGE feather in my "Producer Cap" if I got the job. :)