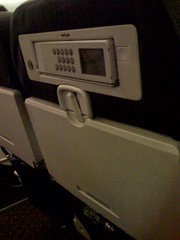 It,
originally uploaded by Da_Zhuang.
Sent from the iFone 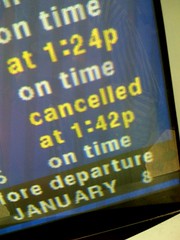 Your flight is...,
originally uploaded by Da_Zhuang.
Sent from the iFone

So here we are, hanging out at O'Hare watching the planes taxi in and out. Mom bought a book of Sudoku, Dad is studying his asprin bottle.

The 2:00 connecting flight we were supposed to be on was cancelled "due to weather" and now the 7:00 flight is delayed 56 minutes. Wheeeeee! The brother unit is prepared to pick us up should "weather" strike again (we suspect we're the only people on the flight).

So I'm sitting here wasting iZora's batteries while we wait.

Me
definately not wearing underpants... Whoops!

Edit:
Oh, wow, I didn't realize the flickr posts didn't upload all the text! My alarm didn't go off this morning, so we were rediculously late getting to the airport. Thanks to Turk for saving the day. This is also why I'm not wearing underpants. Don't rush to dress while you're still 3/4s asleep... 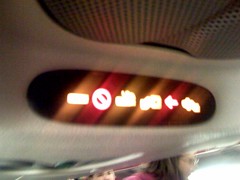 Boarding for PA,
originally uploaded by Da_Zhuang.
Sent from the iFone

We made it, after the forever wait at O'Hare. Ug. Most boring airport in creation. Mom, Dad and I took turns passing Evie and iZora back and forth playing games for the last three hours or so.

But we arrived. Everyone waited here until we got in before heading home for the night... that was 11PM local time. By midnight most of the folks had filtered out.

The house is filled with the laughter that only comes from this family. It's as if each person's sole duty in life is to bring smiles to everyone else here. However, right now there is a tension right below the surface of the smiles. Everyone is all right until the hugs come, and for those few seconds shoulder shake and eyes tear up. How do you respond properly to "It's good to see you" when everyone wishes the events leading up to you being here never happened.

I have to concentrate really hard to maintain composure. It'll be even worse tomorrow.

We missed tonight's viewing thanks to airplanes, but apparently 40 minutes before things were scheduled to start tonight, the line to get in was already two blocks long. People waited up to an hour to pay their respects. They expect tomorrow (today now?) to be even busier.

I'm here now, in the bedroom that was "mine" whenever I visited in college. It pretty much looks exactly the same as it did 10 years ago, which is really a comfort. I even peeked up on top of the ceiling tiles and found the book I found there when I was 17. "The Horizontal Secretary." I don't even remember what inspired me to LOOK there, but one night I was laying in bed staring up at the ceiling, and I decided to stand on the bed and push the tile up, and there it was. I don't think I ever even read it. I just put it back and snickered. But it's still there, with a little more dust than was there 19 years ago.

It's the little things that help me maintain control.

Anyway, I should probably get to bed now. We've got a long day ahead of us.

me
Traveler... now with UnderpantsTM
Collapse