This may have been the longest weekend of my life.

I worked Tuesday morning, ran home, packed quickly, then headed to SF for dress rehearsal. We worked till about 11, then I got on the road for the 4 hour drive to my folks house. Awwwwww yeah, sleepy time driving for the win!

Thanksgiving was, of course, awesome. The dinner train ROCKED (literally). Food was great. Family was great, too. Made costumes for Stanley and George with some help from mom. 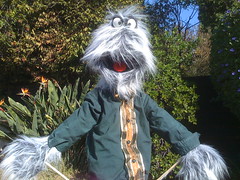 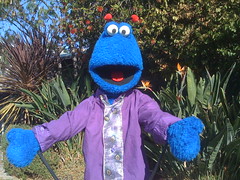 Got up Friday morning and headed back. But it didn't make sense to drive all the way down to San Jose, then BACK up to the city, so I stopped off and hung out with

melibabe for a while before dragging her over to the show.

There was a mostly sold out crowd for opening night, alot of people who'd never come to an Improv show before, but were intrigued by the whole Bollywood thing. At no point was I worried that the show was going to be BAD, but it went a whole lot better than any of us really thought the first performance would go. Definitely at the high end of the expectations spectrum, which is cool.

Saturday, we had two shows. I was scheduled to run lights for the matinée, and perform in the evening show. I've only ever lit one Improv show before, so I was a bit nervous (so much so that I have a FANTASTIC cold sore to show for it). But once everything was underway, I actually had fun with it, and totally didn't stink the place up!! Again, for the matinée, a nearly sold out house.

Dinner was a ham and Gruyère (thanks Peter!!) omlette, and a beet and goat cheese salad-- NOM NOM NOM NOM. Then BACK to the theater, only to discover that the evening show was oversold by 13 seats. WHOOPS!

So packed house performance where I ended up being the protagonist of the show. Looking back at it, it was a good show, but immediately afterward I was post-show quarterbacking so bad that I'm sure I made my cold sore even worse. I think that's the hardest thing about doing long form Improv. Hindsight will kill ya! But instead of lamenting the choices not made, you just have to remember them for the next time a similar situation comes up.

If you're interested, show clips will be posted here: http://YouTube.com/UnDashScripted

Have a good Monday, folks. I finally have a day off!!