So I'm here in Redwood City, at the home of some friends, house and dog sitting for the holidays. The house is a little chilly, as I've not quite figured out the inaccuracy of the thermostat yet. Laptop actually on lap is a bit of a blessing right now. :) It's weird actually having time to sit and... well, update, after the crazyness that was December.

The Great Puppet Bollywood Extravaganza went over REALLY well. People seemed to love it. After the shows, the audiences generally lingered for quite a while to talk to the cast, which is awesome. Thank you to all of you who came out to see it, it's always nice to have friendly faces out there. Special thanks to

melibabe who not only came to see the show, but worked the ticket booth, and served as "pre-rehearsal dinner partner" for me for the whole time I was traveling to the city.

If you're interested, there are clips of the shows posted at http://YouTube.com/UnDashScripted -- after New Years, when I'm back at my desk, in stead of on a Redwood City Couch wrapped in a blanket with my laptop, I'll be posting some more.

The restaurant... oy, the poor restaurant. Actually, the poor staff, really. Our banquet season was a mere shadow of the previous years, as a lot of businesses scaled back their year end celebrations, or eliminated them all together. With that and the overall lower "going out to eat" ratio and the "we're still going out to eat, but tipping less" ration... it's been tough for all of us there. Hopefully things will start picking back up soon. But in the meantime, I've been keeping a casual eye out of potential production jobs around the Bay Area.

The Un-Scripted kids invited me to join the Ensemble just before auditions for TGPBE. Since I like them all so much, and the first puppet musical was such a fun thing, I said yes, of course. So now, no more auditioning for me (which I've covered in a previous post) and I'm part of the crew... one of the "kids" now. :) Last week I referred to Un-Scripted as "we" for the first time. It was a little strange, and wonderful all at the same time.

I'm slated to assistant direct "Un-Scripted Unscripted" in March. It will be a short form show, a little closer to the stuff I performed at the Asylum back in Boston, but they do it a little differently. It's an unhosted show, which means no one comes out to get a suggestion before a scene, it's all part of the scene. I've not done short form since the Jesters, so it should be alot of fun.

Then I'm scheduled to co-direct "B-Movie Night" in August. For those of you following the B-Movie Night saga, it's been YEARS in the making. We're taking

stevetassie's awesome card game and turning it into a live show. But there's been a change in my original design for the show, and one of the THREE B-Movies featured that night will be an actual short film, filmed that night WHILE the second B-Movie is being performed live. Oh yea, we're going there.

Then there's Stanley. OHHHHH Stanley. He's a little disheartened that his "buddy" (The Pocket Paradox) didn't get in to the Evil League of Evil, but that doesn't mean that the blogging will stop. Oh no. He's gung-ho and ready for new adventures, and rumor has it that there's even a post non-acceptance interview with The Pocket Paradox himself in the works.

Stanley just released his first ever Christmas Video, too... even if you're not a celebrator of Christmas, you may want to check this one out, cause... well, I can't say without spoiling it.

This may be the most complex thing I've ever shot. We've greenscreened at Moron Life before, but generally just for backgrounds, never for compositing shots together before. Keeping the camera angles and shot types straight (mostly) was a challenge, but actually really fun. Believe it or not, I did most of it in my head. I only took notes on one shot, and that was to remember which side the angle was on, cause left and right and I aren't really friends much.

I work tomorrow, Christmas Eve, then I run back up here to Redwood City to pick up Cha-Cha (the 3 year old chocolate lab I'm dogsitting), and we're making the 4 hour drive to Redding together to spend time with the family, including my new niece, who joined us in early December. She's my brother-in-law's sister's seven year old daughter, and she's pretty cool, from what I've heard. I've not seen her since she was a little little baby (maybe... I'm not even sure). But she'll be with K & J for a while, which is pretty awesome.

I guess that's pretty much everything at the moment. More updates soon. Have a fantastic Holiday Season, y'all!! 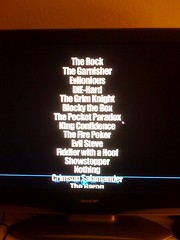 Sent from my iFone
Collapse