Shower, pants and car loaded, and I was out the door by 5:45 on my way to Sacramento. The drive was fast, and uneventful, and I got to Amy and Nathaniel's place a little after 8 where I had an awesome breakfast of French Toast and Bacon.

Amy and Nathaniel dropped me at the airport about half an hour before the two motor homes pulled up with most of the rest of the crew of 30.

We got in line at the Continental desk and everyone got checked in, then through security with no problem at all. We piled into Gordon Bierch and got drinks and garlic fries. Bubba slammed two double vodka and cranberry, cause he doesn't fly well. We all made fun of him, alot.

The plane pushed back, and the adventure began!!

Or not. We stopped, and the captain came on the speaker and said that there was a problem with the Elevator Control, so we had to pull back into the gate. Seriously, we hadn't made it more than 15 feet and had to turn around. So the pilot left the plane to talk to maintenance.

An HOUR later, the flight attendants served us water.

A half an hour after that we were told to get off the plane.

So the entire plane full of people gets in line at the gate where two gate agents don't do anything to help anyone other than to tell us to go downstairs and get our luggage and get back in line at the ticket counter.

We're on the phone with our travel agent. She's trying to talk to the Continental people. Couple folks head off to the bar. Someone must have called the sherrif and warned of impending riot, cause suddenly there were ALOT of cops around. Couple folks go wandering. And an hour later, the first person in line is still the first person in line, and the two ticket agents from up stairs are on the phone doing god knows what.

Eventually everyone makes it back, and we're all not happy. From the looks of it, the next continental flight isn't until Midnight, and it's already overbooked. The flight after that is Monday.

Then one of the illustrious crew shows up and says, "Southwest has a flight leaving in 20 minutes that can take all 30 of us. We have to buy new tickets. They're in Terminal A. Let's go." And so 30 of us file out of line and start trekking from Terminal B to Terminal A while on the phone with the travel agent, Continental, one of the local news stations, and most of our mothers.

At the half way point between the terminals, whomever was on the phone with Continental says "The Continental Agent on the phone can make the rebooking for us on Southwest, but she can only do one couple, then we have to hang up and call back for the next couple." Of course there won't be time for that, and for us to make the flight, so we say that we'll deal with the tickets and let Continental clean it up later. The Continental agent says that if we don't do it through them, they'll cancel our return tickets, just cause they're asshats.

We relay this to the travel agent who tells us to go get on Southwest flight and that she'll have a week to clean up the return flights while we sail.

So we do. All thirty of us storm the Southwest desk, and they're waiting for us, and get us ticketed and checked really freakin fast. They even warned TSA that we were coming, and we all get through security really freakin fast. And we get there before the plane even loads. WOOOO!

And so we get on the plane, and actually see our luggage get loaded, and Bubba, who was drunk enough to fly before, isn't drunk enough to fly anymore, and spends a good portion of the flight to Vegas barfing. The flight crew LOVED our story, and they brought us drinks and were friendly and happy. Kim's card didn't work, so the stewardess gave us our drinks for free.

We land in Vegas a little late, make it to our new gate, and have time to get fuud.
So we grab BK/Subway/Whatever, scarf it down, and by the time we board the flight to Houston we have a call back from Best Travel Agent Evar, who tells us Continental has already refunded the first half of our tickets, and they will not cancel our return flight (not that any of us want to fly them on the way back, but...)

So we get on the plane to Houston. Vegas is rainy, and there's ALOT of turbulance going out. So eventually the captain takes the plane up above the clouds, and immediately everything is calm. Except that *I* start feeling that odd sensation that I get about 2 minutes before I pass out. NAHHHH, thinks I, can't be. I've eaten, I'm rested, couldn't happen. Oh yeah, it could happen. I vaulted over my sister and her husband, "Gotta go to the bathroom." "We can move..." "Gotta go FAST." And the last thing I remember is getting VERY close to the "vacant" sign on the restroom door.

I wake up with my head between the drinks cart and the emergency slide. The nice flight attendant is snapping his fingers asking if I can hear him. My sister and her husband are peeking around the corner trying not to laugh. And since this has happened to me many times before, and I don't want them to even start talking about landing the plane, I start joking with the flight attendants, one of whom chastizes me for not falling on her and getting her out of working with the drama going on in the front of the plane with some of the other passengers.

Eventually I get up and get back to my seat, and sleep the rest of the way to Houston. We were in the back of the plane, so we had a LONG time to talk to the flight attendants while the rest of the plane unloaded. It's then that we find out that we're actually at the OTHER Houston airport. Our hotel is a 45 minute ride away, in a direction that is AWAY from where the boat is... we're actually closer now.

So while we're waiting for luggage, we get on the phone with Hampton Inn Local to see if they have room for 30 of us. They do, and they'll even honor our rate from the other hotel. We call Hampton Inn No-Longer-Local and let them know what's up, and the desk guy says... "Okay. I'll cancel your reservations, call the manager in the morning." Cool.

So the Hampton Inn Local comes with their shuttle to pick us up. It takes three trips.

The poor bastard working Hampton Inn Local's front desk is all by himself, and it's his very first night running the desk alone. So it takes a while to get checked in. But he's really nice to us, and we're really nice to him back, and he even brings out fresh baked cookies for us.

So while the checking in happens, some of the guys head for the local liquor store to get wine and beer, since it's too late to buy hard alcohol to bring on the ship. The shuttle driver from Hampton Inn Local even offers to drive them over to the store. So they go, load up a cart, and take it to the register. It is now 1:15 AM local time.

You can't buy any liquor after 1AM on Sunday.

So they put it all back.

Now, we're all safely enthroned in our rooms. Kim (my wife for the week) just went to get a bottled water from the vending machine and ended up with Strawberry Fanta.

So far, the trip's been pretty eventful!!

We're totally getting boarded by pirates, I know it.

me
So freakin tired... 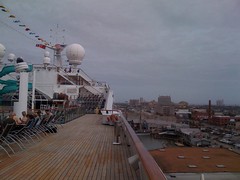 Finally!,
originally uploaded by Da_Zhuang.
Sent from my iFone 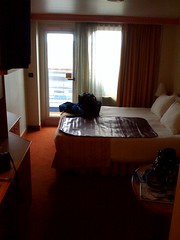 Cabin,
originally uploaded by Da_Zhuang.
Sent from my iFone 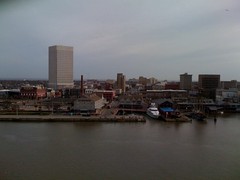 And we're off!,
originally uploaded by Da_Zhuang.
Ciao for now!

Sent from my iFone
Collapse