Thanks to the wonderful world of Food Service, today was my Saturday, which is a good thing unto itself.

It began like any other Saturday. I slept late (a whole half an hour later than my typical wakeup time), got up, started a load of laundry, did some work on a few different projects, showered, and packed up my cameras.

What wasn't the typical Saturday, though, was the (relatively last minute) plan with

AmberDyson to trek to Healdsburg and visit the Murphy-Goode Tasting Room.

So about noon thirty, I walked out my front door, and trekked to the other end of my street, stopping off at Harvest Urban Market to pick up a Chicken Fajita Calzone (aww yeah, MexItaliancan) and a Watermelon Juice. Then I trekked another whole block to my bank to get a little cash, then back a block to the garage to pick up Leslie Ann for the trip. Let me tell you, two whole blocks from my front door to the bank? I dunno about this whole city living thing. Very inconvenient.

It was a stupid beautiful California day, so I dropped Leslie Ann's top* and got on the road to El Cerrito to pick up

AmberDyson. The drive across the Bay Bridge was beautiful, and even sitting in the little traffic around Berkeley wasn't all that bad. With

AmberDyson aquired, and a failed attempt at getting

DaveDyson to accompany us, we got on the road.

It was just a bit over an hour from El Cerrito to Healdsburg. We arrived at the Tasting Room shortly before 3:00. Our guide for the adventure was named Dang (as in "Dang it!" - her words, not mine), and she really knew her stuff. Before we knew it, we were lip deep in wine tastes, talking flavors and aromas and grape choices. Dang kept us occupied for the better part of an hour, even opening things that weren't on the tasting menu for us. And this whole time, she was giving

AmberDyson advice on places to go in Costa Rica in between tidbits about the vineyard and master vintner.

Dang even referred us to a nice restaurant for a late lunch, since after all the wine we sampled (no spitting here, folks) we were probably not in any decent driving condition. It was only then that we found out that our wonderfully knowledgable Dang was a temp. Seriously, a temp. And yet she pulled off the tasting like a seasoned pro. We expressed our surprise, then decided to get out of Dang's hair so she could have a little peace and quiet. And so, tasty tasty lunch ensued. Although they were out of cobbler. :<

The drive home was nice as well. Top down, awesome conversation. We got a little chilly crossing over the San Rafael bridge, but soon enough we were back in El Cerrito and I was dropping

AmberDyson off. Fortunately, I decided to go inside to hang out for a few minutes, because shortly thereafter, it was announced that there would be a spontaneous Game Night.

TrishTillman was on her way, and so we called

melibabe to join us. We ended up playing two and a half games, all of which were pretty fun.

Around 9:00 it was time to go home. Again, beautiful drive. I got stuck in a closed lane on the Bay Bridge before the toll booth, but all of a sudden a new lane opened up that I was able to duck right into. Got back into the city and remembered it was Street Sweeping night, so there wouldn't be any cars on my street, so I stopped back at Harvest Urban Market for chips and salsa, then parked in front of the house while I unloaded groceries, cameras, and the wine purchases I made at the Tasting Room. Car to the garage, scanned some more photos, threw some laundry in the dryer, and then it was time to sit down and put together a blog entry.

Now, I didn't take notes on the wines, because I didn't want to come off as a showoff bucking for attention because I was an applicant for the Very Goode Job. Actually, I wasn't going in with the expectation of being recognized. This was a good thing, because I wasn't recognized. :) Really, the only person we had any contact with was Dang, our tour guide-- and she was a temp!! My whole point in going up there was to taste the Murphy-Goode wines for the first time, and I'm really happy to say that they're GOOD. Like REALLY GOOD.

That makes me happy.

*Leslie Ann is the name of my Miata, in case you were worried 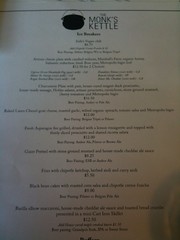 Lunch!,
originally uploaded by Da_Zhuang.
Sent from my iFone...

Being that today is my Sunday, I met up with the uberawesome

ultramundanecom and we hit The Monk's Kettle for lunch. 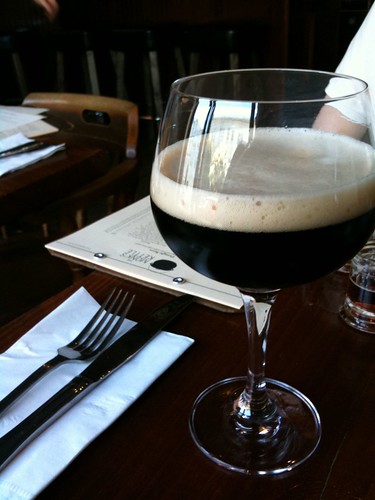 Starting the meal off with a glass of Chambly Noir from Unibroue, I chose the pulled pork sandwich and fries to go with it. Both were quite tasty, and it's always a treat to find a Unibroue beer I've not had before. 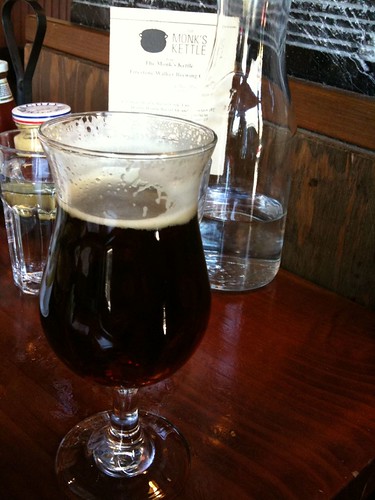 We followed lunch up with a half pint of Oaked Arrogant Bastard Ale. 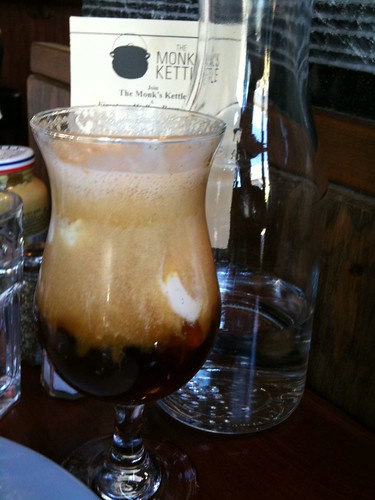 Which I proceeded to turn into a float with ice cream from my pear cobbler. 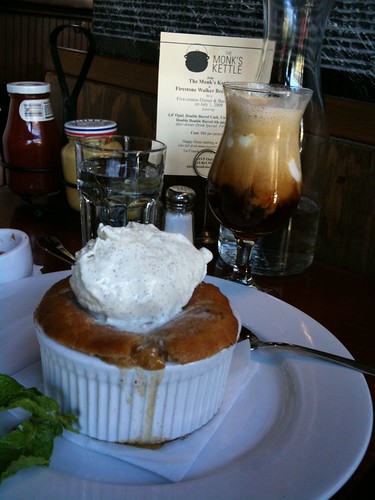 Holy crap, I need a nap.