This was a fantastic experience. Am I disappointed I didn't make the Top 10? Sure. Honestly, I'm a little surprised as well. But I've been doing the acting thing long enough to realize Murphy-Goode isn't only hiring someone for their skill set, but for the personality that will be representing their brand.

Am I qualified to do the job? HELL YEAH. Do I have a fun and vibrant personality to represent Murphy-Goode? HELL YEAH! But if you look at the main difference between *MY* video and everyone who did make the Top 10, I'm a whole lot more serious than they are. And Murphy-Goode takes their wine seriously, but themselves? Not so much.

I made a decision to present myself in a way that I thought was best for the job. Being zany or silly was totally an option, but I felt that emphasizing my credentials was more important than emphasizing that I'm mildly insane.

This is one of the reasons why I did the whole "Super-Goode Friends" video, to show off my less serious side. I presented my business self, and left the Fun, Zany, Improv Clay™ until after the fact. It was a character choice that I made for this audition, and a character choice that I still stand behind 100%. Was it a gamble that didn't pay off? Some might say that it was.

I think, in the long run, more awesome stuff is going to come out of this for me. I've already been contacted by LegendMAG.com to work with them on some articles about making wine more accessible to people who aren't wine snobs, and the contacts I've made throughout this whole process are all really cool people.

Everyone came out ahead in this, and most awesomely, I have another source for really good wine. As a matter of fact, I'll be having a nice bottle of Vat-Man '06 with dinner tonight. (Sorry Dave, I'm drinking your soul.)

Much like my mom, I'll go to bat for anyone—hell, EVERYONE who needs it, but when it comes to going to bat for myself... not so much. This was a new experience for me, and the fact that you all got behind me is awesome, and reminds me just how lucky I am to have such amazing friends.

Love you. Mean it. 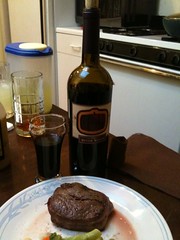 Sent from my iFone...
Collapse