So Monday of last week I took the day off and trekked down Route 1 with my friend Lisa. It's an excursion we'd been planning to take for quite a while, and the timing just finally worked out so we could do it. The destination was unimportant in comparison to our cargo -- a 1956 Hasselblad 500c medium format camera: 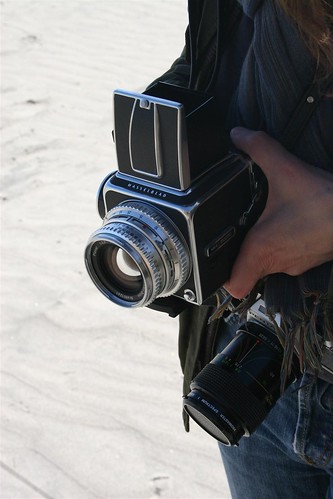 It was heavy and awkward to hold. It had manual focus, hand crank film winding, and before you could take a picture, you had to remove a metal plate from the side of the camera so that the film could be exposed.

It was also one of the sexiest pieces of machinery I've ever held in my hands.

Looking down into the viewfinder and seeing the reversed image of whatever you were looking at through the lens of the camera just made the world seem ten times as intense as it would have seemed otherwise. The optics in that lens are absolutely amazing. I could have spent the whole day just looking through it and NOT taking pictures, and I would have been perfectly happy. But getting to press that shutter button, and getting to hear (and feel) the Kachunk! of the shutter... good lord, it's a photographer's wet dream.

Each of us had two cameras with us. One digital, one film. Lisa was gracious enough to let me carry the Hasselblad all day, and while we burned through two rolls of 12 exposure black and white film, we apparently misloaded the second roll, because it wasn't actually exposed.

That just means we're going to have to go out and do it again.

But here's the results that we DID get...

me
In love with a camera
Collapse