So on a POSITIVE note (which I seem to share so few of recently), I've been seeing a trainer for the last year or so. Twice a week, 30 minutes a pop, plus she monitors my food intake via MyFitnessPal and provides feedback and support on that front.

I'm down 30ish pounds from my highest weight.  Until very recently, that number was 25, and had been at 25 since like... April.  It was the plateau to beat all plateaus.

My trainer has been pushing me to start walking in the evenings/mornings/at lunch/on the weekends more, because that would, obviously, help.  My fitbit step goal is set at 12,000 steps per day.  That's like six miles.  A day.  That's, apparently, what is needed for weightloss.  If I'm out for an ENTIRE day playing Ingress, I'll hit that goal (and likely surpass it), but every day?  HAHAHAHAHAHAAH! No.

Ingress slows down my walking rate because... I have shit to do! So it can take 4 hours to do 6 miles.  Which is just not feasable after work.  Saturday? Sure.

And I don't like to just "go for a walk" for the non-positive notes referenced above.  It fucking SUCKS to be alone with my thoughts, and even music doesn't really help drown them out.  Playing that game does.  But that makes hitting step goal difficult, at best.

But over the weekend, the Wheaton mentioned that he had started using the Zombies, Run! 5K training app.  I looked it up, read the description, and decided that it might just work.  Gamifying the run rather than just gamifying getting off the couch (no insult intended, Ingress).

And so yesterday, I did the intro mission.  And tonight I did the first training mission.

And it was kinda fun.

Yeah, it was kinda fun. 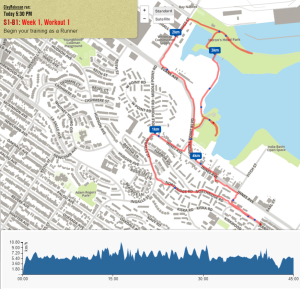 If you happen to also use the app, let me know.  Or if you want to take a gander at my profile (warning, story spoilers when you look at the whole thing rather than what I clipped above), let me know.  But you're going to have to promise not to make fun of my music choices, dick.
Collapse